Click the button below to provide details of your leasing requirements.

For 12 years Dave Busby went to to work every day as a machinist for a Chrysler supplier. When the automotive industry plunged into a downward spiral in the fall of 2008, Dave found himself out of work when his company closed its doors. 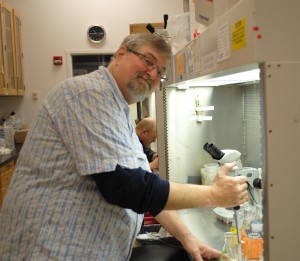 Dave Busby in the tissue culture lab at the Danforth Center.

Knowing in advance that he would be out of a job shortly, Dave sat down at the computer and began searching for opportunities that summer. By November, he was officially out of work and had no leads on a new job. Classified as a “technician,” Dave typed those words into his job search engine and “biotechnology” kept appearing. After Googling “biotechnology”, Dave didn’t really think it was up his alley but decided to look into it a little further.

Dave called the Missouri Biotechnology Association, MOBIO  to inquire about the field and potential jobs in the biotechnology industry. He ended up talking to Kelly Gillespie, MOBIO’s Executive Director. Until Kelly mentioned that they were looking for hands-on people, Dave had just about ruled the biotech field out. That 15 minute phone call would forever change his career path.

Although Dave’s background was not geared toward the science industry, he knew he was good at working with his hands and that the biotech field was booming with job opportunites in the St. Louis region. So at age 54, he decided to switch career paths and seek training as a biotechnology technician.

Dave’s previous company qualified for the Trade Readjustment Allowance program (TRA), which provided him with the financial resources he needed to enroll in the St. Louis Community College’s Center for Plant and Life Sciences two-year bio-technician training program in the spring of 2009.

While in the program, Dave was encouraged to take a plant transformation elective course taught by   Donald Danforth Plant Science Center researchers Nigel Taylor and Kevin Lutke. Dave had not been in a classroom setting in a long while and was encouraged to take advantage of STLCC’s free tutors, and stay after class and work one-one with the instructors. St. Louis Community College wanted him to succeed as much as he did, and with a guidance and perseverance he quickly caught up. 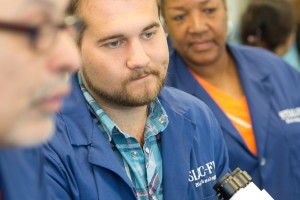 STLCC students in the biotechnology program at BRDG Park.

As part of the program, Dave was required to do an internship through the Biobench Contract Research Organization managed by the Community College. This provided him the opportunity to work on research projects with business partners in an industrial, professional setting, which bridged his classroom learning with the real world projects.

The program, which has become a national model and has been recognized for excellence by the Missouri Biotechnology Organization, allows students to gain basic laboratory skills and experience by utilizing BRDG Park and the Danforth Center’s state-of-the-art equipment.

During his training, Dave visited the Danforth Center many times to meet with Taylor and Lutke, and heard that a lab technician position was posted at the Danforth Center.  He applied and was hired. After landing the job, Dave gained even more of an understanding of the symbiotic relationship between the Community College’s biotech training program, BRDG Park, and the Danforth Center.  While creating relationships between students and top-notch scientists, this unique approach to workforce preparation is building the biotech economy in the St. Louis region. 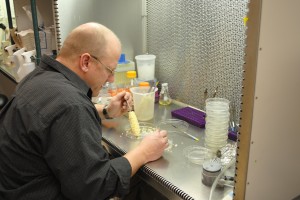 Kevin Lutke in the tissue culture lab at the Danforth Center.

Everything seemed to have lined up perfectly, from the job search, to the 15 minute phone call with Gillespie, to finding the Community College’s program, resulting in a full-time position as a technician at the Danforth Center.

Almost two years later, Dave is incredibly thankful to the St. Louis Community College and how it provided the training he needed to created a new career opportunity. “I would not have made it to where I am without their continuous support. It was really meaningful when they told me that if I ever needed anything, to come and see them, and they truly meant it. If I needed help with something today, I know they wouldn’t hesitate to respond.”

In the Danforth Center’s tissue culture lab, Dave has expanded his knowledge in the biotech field and enjoys the variety of work that fills his days. He now works under Lutke, who stated, “Dave brings a great background of workmanship, organization, quality, and pride to the tissue culture facility. Coupled with the training and skills developed in the Community College program, he has become a valuable asset to the lab.”

He not only understands what biotechnology is, but is fully immersed in the field thanks to his willingness to begin a new stage in his career and the Community College for providing the stepping stone to his new career path.

The BIOBUZZ Collection is a feature of BRDG Park’s BIOBUZZ Blog that includes a sampling... More